Several news-media have reproduced the famous overview about e-cigarettes prepared by the German Cancer Research Center. “Coincidentally”, ALL media present this as a new study and new findings about e-cigarettes, while in reality it is an overview of studies performed by other researchers. I wonder who has leaked to the media that it is a new study…

However, the main reason for this report is to discuss about the issue of formaldehyde emitted from e-cigarettes and the potential health impacts of this. The German Cancer Research Center states that: “The aerosol of some liquids contains harmful substances (formaldehyde, acetaldehyde, acrolein, diethylene glycol, nickel, chromium, lead).” On page 9, they state: “The aforementioned substances (formaldehyde and 3 more) have been classified by the German Research Foundation (Deutsche Forschungsgemeinschaft, DFG) and the International Agency for Research on Cancer (IARC) as carcinogenic. Since there is no safe threshold value for these substances, it cannot be excluded that using electronic cigarettes increases cancer risk, even though these substances may be present in very small amounts.” On page 10 of their report, they provide a figure showing levels of formaldehyde and acetaldehyde emitted from e-cigarettes, according to the study by Schripp et al. On page 11, they cite once again the study by Schripp et al and conclude by saying: “Carcinogenic substances are found in some aerosols. Using e-cigarettes leads to emission of propylene glycol, ultrafine liquid particles, nicotine and carcinogenic substances into indoor air.”

Where the truth lies

The truth is that formaldehyde is classified as a group 1 carcinogen by the International Agency for research on Cancer (IARC). However, it should be mentioned that it is not the presence of the substance but the level of exposure that is important. Formaldehyde is a natural substance, present in the environment and produced by the metabolism of the human organism. It is exhaled by healthy humans, and I am sure none has ever stated that being close to another person increases your risk of cancer.

It is extremely interesting to see the way they have used the study by Schripp et al in order to make false claims about the emission of formaldehyde from e-cigarettes and the related cancer risk. In that study, a smoker was placed inside an 8m3 room (imagine a 2-meter width by 2-meter length by 2-meter height room, similar to a prison room). At the beginning, they monitored and measured air quality for 20 minutes. Then, the smoker used one e-cigarette (6 deep puffs in 6 minutes). After waiting for 15 minutes, he used another cigarette (same puffs). Similarly, a third e-cigarette was used, and finally he smoked 1 tobacco cigarette. Below are the results of formaldehyde levels. 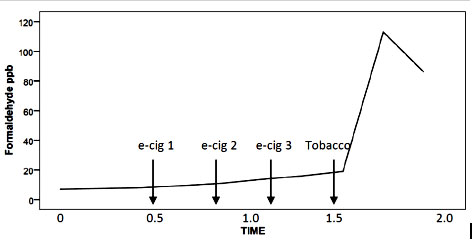 Watch how the levels of formaldehyde gradually increase from time 0 (which is the time when the smoker entered the room) until the time smoker started using the first e-cigarette, and also for the time between e-cigarette use (in which time the smoker was inside the room without using anything). It is more obvious in the original graph but i cannot show it here for copyright issues. The authors saw that and clearly write in their article: “However, continuous monitoring only showed a slight increase in the formaldehyde concentration in the 8-m3 emission test chamber before and during the consumption of the three “liquids” (see Table 4 and Figure 2). This might be caused by the person in the chamber itself, because people are known to exhale formaldehyde in low amounts (Riess et al., 2010) and the increase was already observed during the conditioning phase (Figure 2). Furthermore, the release of formaldehyde was also below the limit of detection in the small-scale experiments.”

They also support (mentioned above) that there is no safety limit set by public health authorities for formaldehyde. This is not true. The WHO has set levels for normal indoor conditions. Surprisingly, these levels are almost 7 times higher compared to the levels observed from e-cigarette use. Below is the graph, available online here. 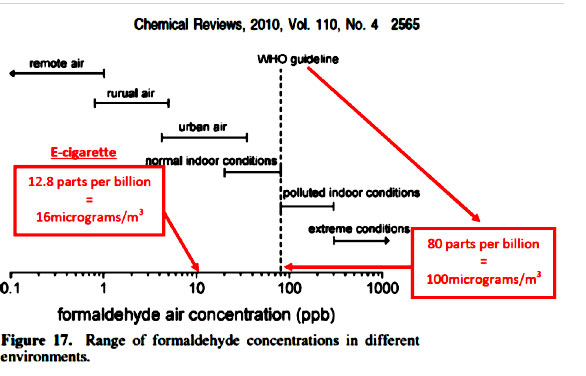 Additionally, the Occupational Safety and Health Administration (OSHA) has set a permissible exposure limit of 900micrograms per m3 for an 8-hour daily exposure for 5 days per week (available here). This is 56 times higher compared to the e-cigarette findings by Schripp et al.

I left the most important and interesting information for the end. The Environmental Protection Agency has done some analysis of the cancer risk according to levels of exposure to formaldehyde in air. They state: “EPA estimates that, if an individual were to continuously breathe air containing formaldehyde at an average of 0.08 µg/m3 over his or her entire lifetime, that person would theoretically have no more than a one-in-a-million increased chance of developing cancer as a direct result of breathing air containing this chemical.” Based on this, if someone is using the e-cigarette for 24 hours per day-365 days per year-for the rest of his life, taking 6 puffs every 15 minutes in a 2x2x2 room (as in the study by Schripp), the bystander would have a 0.02% higher chance of developing cancer.

According to the data, and the analysis for other chemicals mentioned in the German Cancer Institute Report, the cancer risk is so low that it probably is immeasurable (even if you add all chemicals together). Of course, this is not proof that e-cigarettes are absolutely healthy or that they may not cause some adverse effects from long-term use. This will be determined by observing users over a period of many years. However, currently available evidence indicate that they are by far less harmful compared to smoking and pose no risk to bystanders. None can disagree with that.

Dr Farsalinos is a researcher at Onassis Cardiac Surgery Center in Athens-Greece and at Medical Imaging Research Center, University Hospital Gathuisberg in Leuven-Belgium. He is actively involved in research on e-cigarettes’ safety and risk profile.