US Surgeon General declares e-cigarettes are a public health concern. But where is the evidence of harm?

Today, the US Surgeon General released a report about e-cigarettes and youth (not about e-cigarettes in general). The major conclusion in the report is that e-cigarette among youth and young adults has become a public health concern. Actions like incorporating e-cigarettes into smoke-free policies, increases taxes and price, educational initiatives, preventing access to youth and regulating marketing are suggested (although the reports mentions that “actions can be taken” instead of “actions should be taken”).

Interestingly, the report was released together with a very well-designed website, with sections like “KNOW THE RISKS”, “get the facts” and “take action”. The questions are:

According to the Surgeon General, e-cigarettes are tobacco products. No need to repeat that this statement is as inaccurate as it can get, and is based on a legal definition of tobacco product as a product containing anything (any component) derived from tobacco. There is a whole section titled “Legal Basis for Regulating E-Cigarettes as Tobacco Products”. You will not find however any sections titled “Common Sense for Not Regulating E-Cigarettes as Tobacco Products”. Obviously this definition makes no sense at all, and I prefer to accept and follow common sense rather than legal “definitions”. It is noteworthy to mention that in a table presenting e-cigarette brands owned by tobacco companies (table 1.1), the heat-not-burn tobacco products IQOS and Ploom are mentioned as e-cigarette brands. Total confusion (is it unintentional?)…

The report is filled with claims about harm, while there are no real facts about any harm caused by e-cigarettes to anyone (user or bystander). The statements about harmful and potentially harmful compounds are nothing more than emotional statements with no real content in terms of realistic risk. In all the statements related to e-cigarettes and harm, you can easily substitute the term “e-cigarette” with terms like “human breath” (it does emit potentially harmful aldehydes), “indoor air” (you are probably exposed to more formaldehyde by just staying at home compared to vaping), “walking on the streets”, “medications” (I am not aware of any medication without side effects or any medical intervention without potential complications), or anything you can imagine. To clarify, I am not suggesting that e-cigarettes are risk-free or as safe as indoor air or human breath. I am just saying that such a presentation is highly misleading and provides no useful information about risk. The statement “it is not safe” have been characterized as poor quality health information by Lynn Kozlowski.

Another typical case of a purely emotional statement is the section “criminalizing” flavors in e-cigarettes for attracting youth. The same statements about chocolate, candies, gummy bears etc are mentioned in this report. I don’t know any adult who would eat anything flavorless or smell anything odorless and still get some satisfaction from it. Since chocolate is so commonly mentioned, see below the chocolate consumption in the US in 2010 according to age groups. 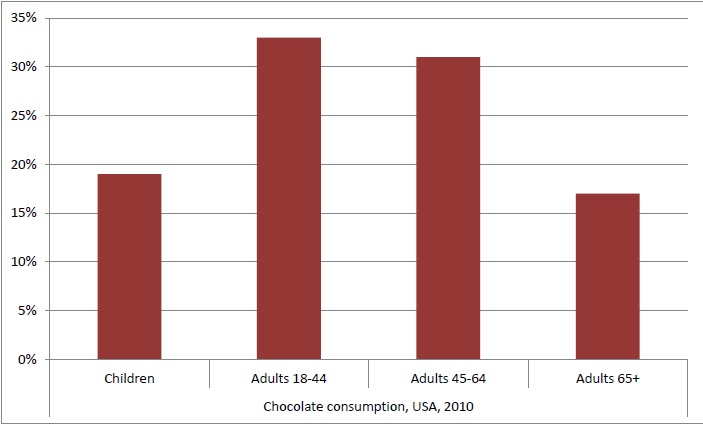 I was particularly concerned by the section titled “Perceived Harm of E-Cigarettes”. This section is written in a way implying that it is inappropriate (or undesirable) for people to correctly perceive that e-cigarettes are less harmful than smoking. Hopefully, Surgeon General does not think that the society (including adolescents) should be deceived into thinking that there is no risk difference. I am always a strong proponent for the truth. The report mentions that one of the cited reasons for using e-cigarettes among both youth and young adults is lower perception of harm. This cannot justify lying to the public as a means of reducing e-cigarette use.

There are many more things that can be mentioned, like the adverse effects of nicotine on adolescent animal brain. There are also some strange, apparently critical, statements about e-cigarettes which make little sense. For example, “Prices of e-cigarette products are inversely related to sales volume: as prices have declined, sales have sharply increased”. Well, isn’t that the case for any product in general? Should we make e-cigarettes more expensive so that they have a more fair competition with tobacco cigarettes? Fortunately, that was not mentioned as a reason to increase prices of e-cigarettes.

The report completely ignores potential benefits from e-cigarettes. First, there is no analysis on how recommendations on taxation or possible restrictions on flavors could affect adult smokers trying to quit with the help of e-cigarettes. I suppose Surgeon General cares for the health of the whole population. There is also the case of youth smokers. Wouldn’t we prefer smoking adolescents to use e-cigarettes instead of combustible tobacco products? Well, of course not using anything is the best option. But you don’t need to be Surgeon General to say that. But I wonder, why didn’t the report cite two studies showing that e-cigarettes restrictions might increase smoking among youth (here and here)?

I agree with some of the recommendations proposed in the report. Regulation on marketing is indeed needed. Not a ban, like that imposed in the EU, but clear and proper rules. A model of regulated marketing worked pretty well in the UK (but had to be abandoned due to the TPD). Child resistance packaging should have already been implemented (in the EU it was almost universally implemented long before the TPD). I wouldn’t disagree with minimum packaging sizes (unlike the unjustified decision of the EU on maximum volume of bottles and atomizers). But other proposals, such as health warnings (totally unsubstantiated with the exception of a warning on the addictive potential of nicotine), regulation of nicotine levels (is this another case of very low nicotine e-cigarettes?) and restrictions on flavors are counterproductive and could have unintended consequences for smokers (who need e-cigarettes as an additional tool to substitute smoking) while not really protecting anyone from harm. The report is unfortunately one-sided and will certainly be followed by another fear-mongering public campaign about the “evil e-cigarettes”. This will result in a broader misconception about e-cigarette risks compared to smoking and will discourage more smokers from making the switch. And then, we will blame the e-cigarette for the high dual use observed in the US…