Today my e-mailbox is full of messages discussing about the great issue of carcinogens being at 10 times higher levels in e-cigarettes compared to tobacco cigarettes. There is a quote from Naoki Kunugita, a researcher at the Department of Environmental Health-National Institute of Public Health in Japan, about this: "In one brand of e-cigarette the team found more than 10 times the level of carcinogens contained in one regular cigarette".

Interestingly, while all news-media discuss about carcinogens (plural), the text mentions only formaldehyde. To tell the whole truth, this “substance found in building materials and embalming fluids” is in reality present everywhere in the environment, in every house, in every city, town, village, urban or rural area. So, all the noise in the newsmedia is about one carcinogen, not some carcinogens. Moreover, the title is nothing but misleading since they found the formaldehyde at “10 levels higher than cigarettes” in 1 of the 10 products tested, not in every case.

However, there is a more interesting story behind this. I immediately contacted Prof. Kunugita to ask the results of their studies. His response was immediate, mentioning the list of published studies from which he got the results. In fact, the results of analysis of 13 Japanese brands were presented in a table 1 in a recent review on carbonyls generated from e-cigarettes, published in International Journal of Environmental Research and Public Health. The results are shown in the table below. 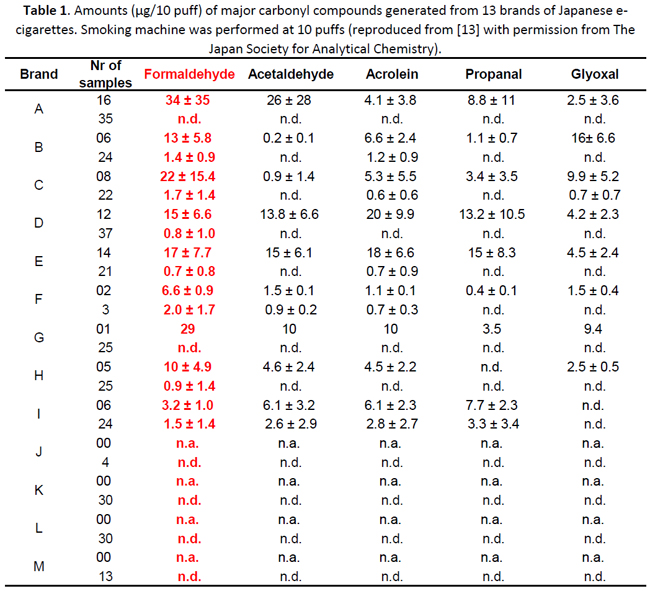 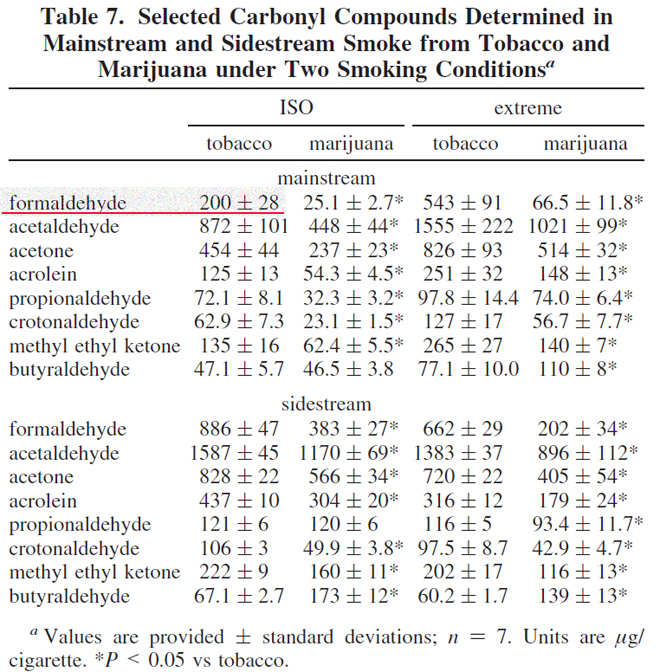 While we still need to see the levels of carbonyls generated from high-power e-cigarette use (using appropriate atomizers of course), the message concerning all this media frenzy is clear. Even in the worst-case Japanese product, e-cigarette aerosol contained 6 times lower formaldehyde levels compared to tobacco cigarette smoke. Where does the “10 times higher than smoking” statement comes from? I have no idea.

Obviously, we have to realize that focusing the discussion on one of the tens of carcinogens present in tobacco cigarette smoke is misleading. Even if e-cigarettes contained similar, or higher, levels of formaldehyde, they do not contain the majority of other toxic and carcinogenic substances present in cigarette smoke. Overall, any residual risk from e-cigarette use is orders of magnitude lower than smoking. This is exactly what smokers need (and deserve) to know.

After my comment, Prof Kunugita contacted me again. He mentioned that the newsmedia reports refer to a recent evaluation of a newer-generation device, in which he found 1600μg formaldehyde per 15 puffs. It is true that this level is 10 times higher than what is present in tobacco cigarettes. However, this is an unpublished result, a single extreme case out of the many products he tested, and we do not know what went wrong in that case (e.g. high power levels, low levels of liquid inside, malfunctioning device etc). Still, the media frenzy is completely inappropriate.

This confusion shows why it is important for a new, systematic evaluation of aldehydes release, taking into consideration realistic conditions and puffing patterns together with evaluation of temperatures of evaporation. This is exactly what we are preparing to do, starting in a few days.